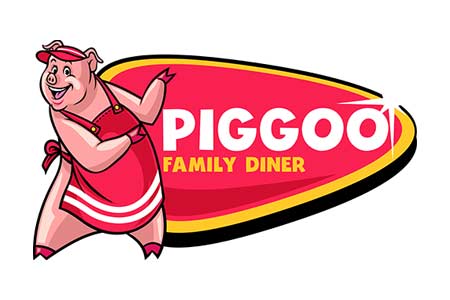 Once upon a time, even to say the word was to instantly start an argument about propriety. It was an argument that pitted regional die-hards against each other in a sectional controversy of taste buds and traditions. A debate full of flame and smoke that ultimately revolved around the single right and proper way to fire one’s food.

And then, one fine day, into this cuisine controversy stepped Piggoo. A porcine gent of elevated tastes, he had the audacity to suggest that the infamous issue was actually not meant to be fought over, but well celebrated! Barbecue appeared at all times and places all over the world and brought with it a full complement of styles and sauces that deserved nothing less than a full sensory exploration!

Piggoo is the portal to the barbecue explorer’s world. It features beloved classics such as pulled pork and St. Louis-style ribs. It adds new influences like pork rolls and Chow Bao Sliders. It indulges the vegetarian side with a notable “No Pig” sandwich of grilled portobello mushrooms. And, it pulls in distinctive side dishes including jalapeño cheese grits, spicy green beans, and sweet potato casserole.

Knowing that the heartbeat of barbecue is the sauce, Piggoo floods palates with homemade selections from around the global kitchen, so try them all!

In short, Piggoo is passion on a plate. So, experiment. Expand your barbecue horizons. Above all, savor every bite!

Our mission is to spread our love and passion for what we do one meal, one laughter, one experience, and one neighborhood at a time. Our main focus is to bring people together in a comfortable environment, to relax and have a good time, while providing unforgettable customer service.